Let me preface this post by saying that I am not usually one to openly complain about a company. I shop online quite frequently and I've dealt with several shops that only sell online where I've experienced bad, average, and outstanding customer service. Yet, this was the first I have come across one that is extremely unprofessional in my eyes. I have considered keeping the experience to myself, but I also feel that it is necessary to at least put this information out there. Please note that the following is to be taken as a thorough attempt at an honest retelling of my experience with the website Karens Closet NY and is not meant as malicious or slanderous content to misrepresent them in any way.

On June 25th, I ordered a pair of Bamboo Driven Black Nubuck Platform Cage Wedges that cost me 46.17$ including shipping. I had no tracking information other than an automated order status update from the website two days after the order was placed. But according to the Delivery Confirmation number on the parcel, it was delivered on July 5th. I obviously can't prove when the package was sent out, but the point is that it took more than a week to arrive, which is understandable. I had left for Chicago at the end of June and was unable to open the parcel until the first week of August when I was back home.

Upon opening the box, I received wedge heels that were similar to the ones I thought I ordered. The pair I received were by Qupid, which is not the Bamboo brand I ordered, and they were in a size 8 instead of a size 7. I was surprised that I was not notified by this unauthorized change with the fulfillment of my order, but didn't think this was a big deal until I tried them on. They ended up being far too big and weren't even close to the size of my feet where it would've been manageable. Slightly frustrated, I called the customer service phone number and was answered by a Google Voice answering machine. I left a message and expected a call back by the next day but decided to fill out the online "Contact Us" form on the website. This was my initial message to them: 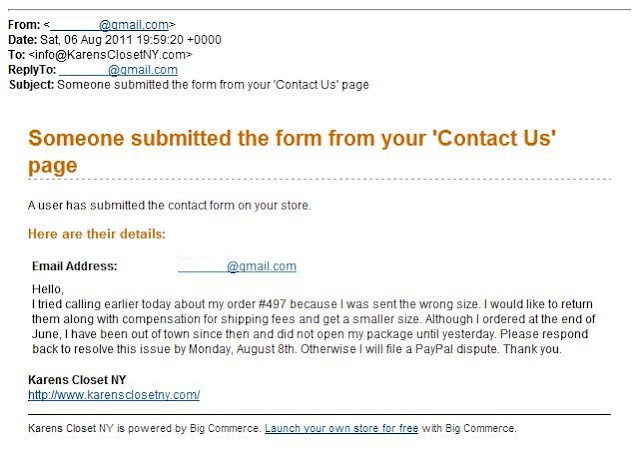 I received a response quite promptly (as it was through a Blackberry phone).

This is a standard, generic response, which actually isn't that bad, but completely infuriating as a customer. I understand that I was requesting something beyond the scope of their return policy, but they were not even trying to be accommodating. I didn't even get an apology for receiving shoes that I didn't even order. Am I the one in the wrong right now? It's not like it would have been any different even if I opened my parcel as soon it was delivered because I would have still returned the shoes. Karens Closet NY messed up on their end of our transaction and I was just supposed to deal with it? 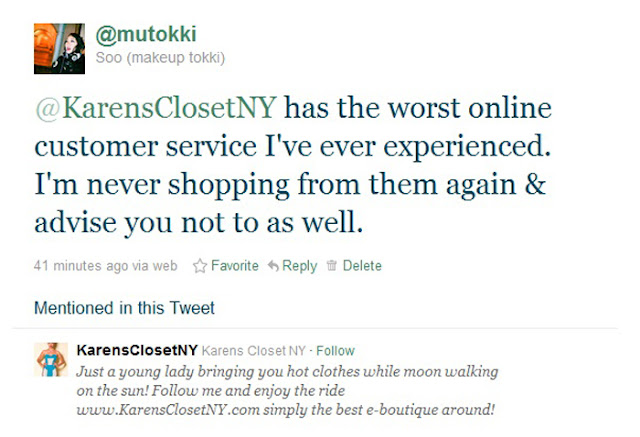 After my response back, I did not receive another email until I outed them on twitter. Maybe that timing was simply a coincidence and they were planning on contacting me back, but I can't be sure. Anyway, the above screencapped tweet is now gone, and here is their response after mine. 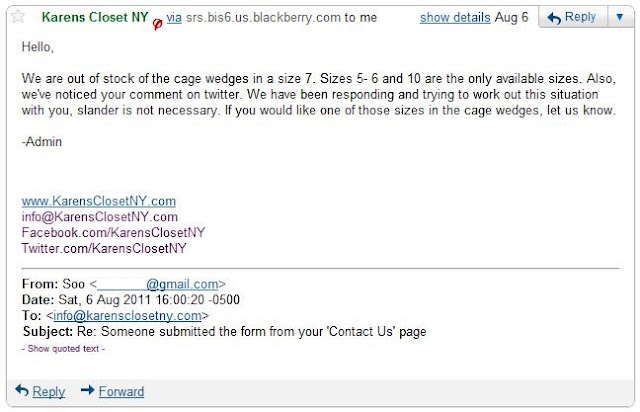 Their first response had no indication of any desire to 'work it out' with me. I read it as a response that can be summed up to "sorry, but no." Am I missing something? Did I misinterpret that initial response? It is pretty clear that I was supposed to be "understanding" about wasting the 47$ I spent for a useless pair of heels that I would never wear. Also, accusing me of slander? Defamation means false or malicious reporting, and that is certainly not what I did. How is it slander if what I stated was true? It literally was the worst customer service I have ever experienced--no other place, whether physically or online has treated me worse than Karens Closet NY in regards to customer service, and I am not stating (typing) these words lightly.

Okay, at this point, my retail rage has quelled a bit and I am trying to be an understanding customer. I get that being part of an online business isn't one of the easier jobs in the world, but I was trying to do whatever it took to fulfill my request. Was I being unreasonable? How was I supposed to know about their stock situation? After the already unclear correspondence I had with Karens Closet NY, I decided to do whatever I had to in order to secure what was best for me. After two days with no response, I filed a PayPal dispute. 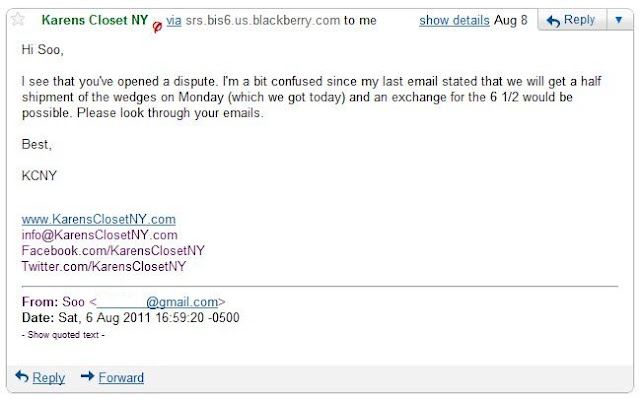 I was baffled reading the email above. I scoured through my Spam and Trash folders thinking I had overlooked an email, but I found nothing. No email about this new shipment of wedges or any sort of confirmation where I could confidently believe an exchange for the correct sized shoes would happen. PayPal has a strict 45 day time frame to open a dispute. I kept my PayPal dispute to help insure myself because it didn't seem like we were ever on the same page. Karens Closet NY thought they told me one thing so my actions in response were apparently confusing. I thought that when I initially tried to contact them, I stated in the first message that I would be filing a dispute if things were not resolved by August 8th. I'd also like to mention that I didn't receive the above response until soon after I filed the PayPal dispute.

As unreliable as they had been up until this point, I still held out hope for receiving the right sized shoes. I gave them the benefit of the doubt and stated what I knew had been said between us. 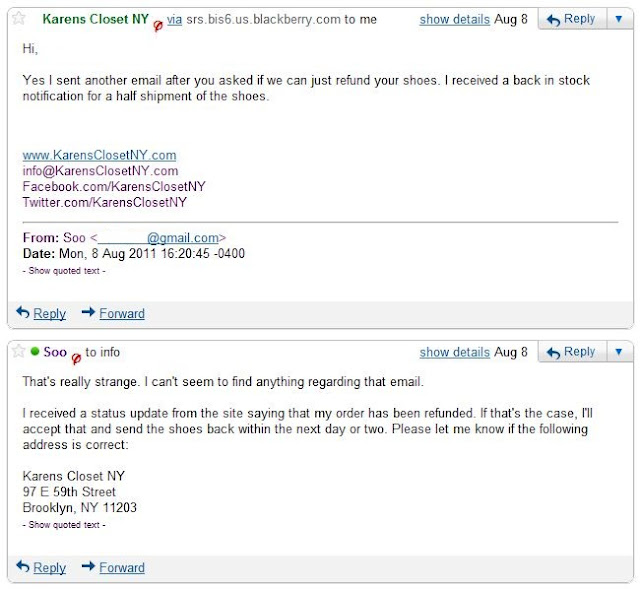 So at this point, I'm thinking that an exchange is happening. Once I send the missent shoes back, the right sized shoes will be delivered in return. 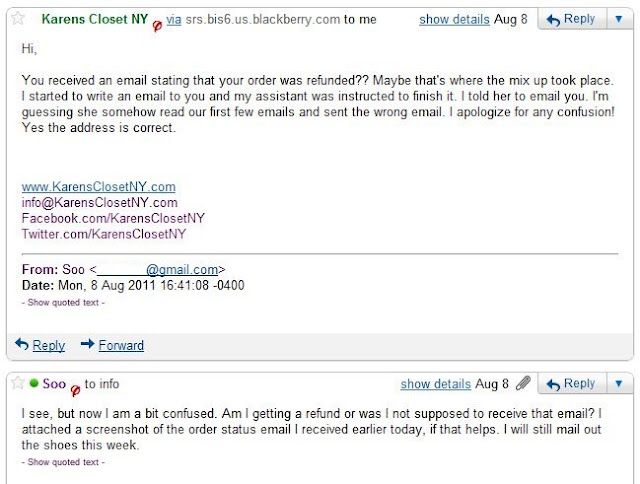 This was the first time I got an apology! It was about them making a mistake and actually acknowledging it. Still no apology for sending the wrong shoes to begin with, but still, it was a step in the right direction. I thought we were finally getting along and this was going to have a happy outcome where I would own a pair of cute wedge heels. 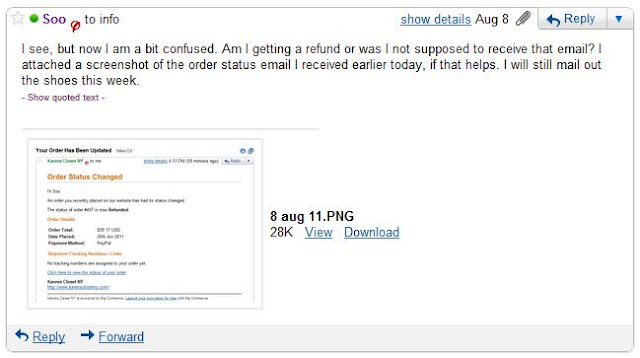 Then for the next two weeks, I heard nothing. I still wasn't sure what was going on, and at this point, I was now out 62.12$ with no missent shoes in my possession for defense, doing all I could do: rely on PayPal. 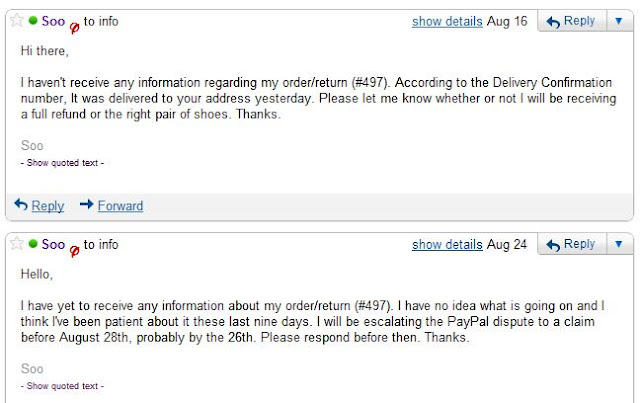 I decided to stick with my PayPal dispute and eventually escalate to a claim if need be. I sent two emails and even tried to let them know on twitter again. No response. I wasn't going to be acknowledged anymore, and I tried to accept that, but it was so ridiculously frustrating. I didn't even care about getting my money back for shipping the missent shoes anymore. I just wanted some money back for stupidly wasting my time and thought that if PayPal didn't help me, I'd really be out those sixty bucks. 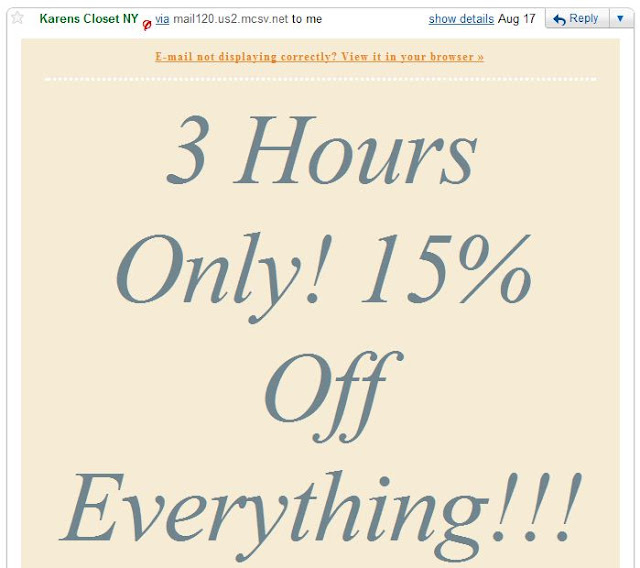 In between the two weeks I waited for a response, I got a lovely automated email about a sale. How exciting. Here I am, trying to patient with a disorganized webshop and I get a notification that there's a sale. I get that it's automated, but way to rub salt in the wound. 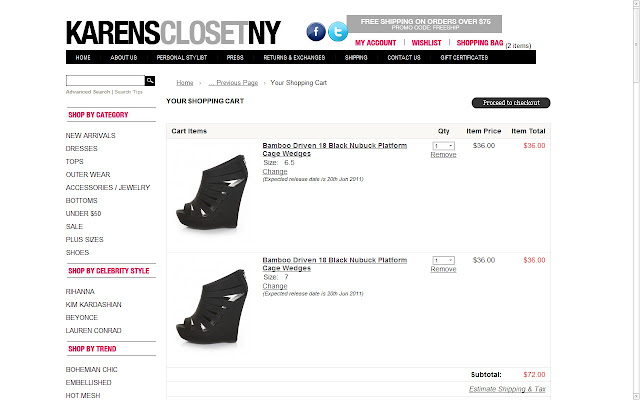 That metaphorical salt just got better with time. On August 25th, a little after 11 pm, I checked the site to see if I could add either the 6.5 or 7 sized wedge heels to my cart and checkout. It's one thing to decline my request for an exchange if the sought item is no longer in stock. I would understand that completely. But to see the right size available, not know what was going on with the floating 46.17$ in addition to willing myself not to buy the heels because of how they had been treating me, felt terrible. I was an unwanted and ignored customer and I felt like they were taunting me for it.

Here's what's interesting though. I looked up their return policy today and it has been revised since the last time I've seen it. Take a look at what it looks like today:

Karens Closet NY no longer accepts returns! How convenient in addition to their awful customer service. Here is what their return policy resembled before, it is an iPhone photo from their Return Form that I made sure to copy before mailing off the missent shoes.

According to their previous policy which was valid during the time of our exchange, I should have received compensation for the 15.95$ I had to spend on shipping missent shoes back to them. In their first response to me, they stated that they do not refund shipping spent on returns, which would apply had I not been sent the wrong shoes to begin with. Eventually, I did end up receiving credit (46.17$) back to my account through the PayPal claim.

To be honest, I was distrustful of the website initially because it navigated shoddily, and I hadn't ordered from or heard of them before. However, I mistakenly ignored my gut reaction and prioritized my desire for the shoes because I couldn't find my size anywhere else online. For me, buying from an online store I've never shopped at or heard of before is taking a leap of faith. This is especially true if they are an online-only store and there are absolutely no means of doing business in person. The least you would expect is average customer service, correct? I'm not even talking about going above and beyond the typical "I give you money for the product(s) I want and you send them to me" exchange, I just mean a business transaction done right.

Also, don't accuse me of slander when it is not justified. I know what slander is, and I'm not trying to be a brat or stir up drama with this post, but I can reliably say that I shop online a lot. I've had my fair share of experience with online shops that either go beyond a normal business transaction and ones that just do the job right. So tell me, is it slander if what's stated is true? I didn't falsify their business practices nor did I omit or modify any email that was exchanged between us to make them look worse than they already do. From my perspective, I have literally never had worse customer service from an online shop until I experienced it with Karens Closet NY. How is that a false accusation? I'm simply stating what's been true for me as a customer, and that's the reputation they set themselves up to have.

All of this stress over wanting a pair of cute wedge heels. Was I wrong to fight for my money back? In terms of what I post on here, I do not enjoy posting about products that don't work out for me, let alone complain about a company who only does business online. One bad product does not ruin a brand, and I suppose one bad experience shouldn't ruin a webshop, but I cannot see myself shopping from Karens Closet NY ever again. Their reputation is forever soiled as disorganized and completely unprofessional in my eyes and they obviously don't care about their public image enough to try and rectify that with a 'difficult' customer such as myself.